Children are like wet cement. Whatever falls on them makes an impression. – Haim G. Ginott

All that YOU See in NotesnLines.... Basically!

Sujatha has been happily occupying a niche in a child’s space for over two decades and enjoys the view from that unique perch! A range of projects for a number of organizations has seen Sujatha don a number of HATS! - Writer / Composer / Singer / Script-writer / Story-teller / Choreographer / Content developer!

Sujatha believes that learning should be an exciting, vibrant journey of discovery for a young mind!

The role of the educator must be to create spaces that facilitate a child to expand knowledge, spark curiosity and tickle thought processes that help evolve a unique individual.

Kashyap began his musical journey way back in 2001, when his parents got him to go for guitar lessons. He spent several years learning the guitar before eventually switching to the bass guitar around 2007-2008. After a hiatus from music, where he tried to pursue a ‘regular’ job, he realised it wasn’t his cup of tea.
In 2015, he decided music was ‘THE’ option for him and decided to attend Swarnabhoomi Academy of Music, and received a Diploma in Music Production.
Since then, he’s been a composer, producer and instrumentalist - working with a variety of artists in the country, most notably, Jatayu - a Nu-Jazz project.
He has worked with Sujatha on her numerous projects for schools and other learning institutions such as ELF Learning Solutions. His portfolio also includes creating scores and producing songs for the noted theatre group CreaShakti, as well as the well-known Tulika Publications for a series of audio stories on Spotify.

His other interests include exploring the histories and cultural impacts of different styles of music, the nature of man and meaning, the occasional football match, and is also the godfather to many of his friends’ cats. To know more about his work and interests, visit his handles @therealjatayu & @kashtag123 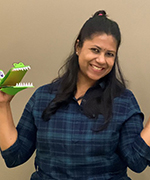 Preethi Bharath,
Video Animator and Editor
Ms. Preethi Bharath is a mom of a very curious, keen mind, not to mention an avid Dino-lover! A musician by profession, she got into the exciting world of making video animations, in order to satiate the curious mind of her 5 year old son. She makes animation videos for NotesnLines and firmly believes that this experience has helped her explore more into the whimsical world of imagination and wonder!
Do head to her Instagram handle @pr33thi to know more about her!

Veni Subramanian
Photographer, Designer
Ms. Veni Subramanian is an extremely talented photographer, and a super multitasking mom of rambunctious twins!
A person with a generous amount of creative streak in her, Veni has created the title cover page as well as the mascots Noli and Tessi of NotesnLines! She is also the videographer for all our action songs!
Do head to her Instagram handle @padambyveni to see some of her stunning portraits!

Got something to say?